The Sweetest of Venus
by
Sarah Chadwick 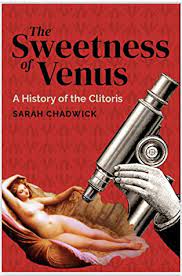 For millennia, scientists thought women were inside-out versions of men, and male anxiety about female sexuality generated ludicrous ideas and perpetuated inaccurate information. The Sweetness of Venus is a provocative, straight-talking history that exposes the denial, misunderstanding, brutality, and lies endured by this taboo part of human anatomy.

Much of the story of the clitoris has been defined by those who discovered and mapped her. However, even after the true anatomy of the clitoris was finally fully mapped with 3D imaging in 2005, it still hardly gets a mention in America’s best-selling teen sex-education book for girls, and no mention at all in the parallel book for boys. Equality when it comes to sex has not been achieved.

This book challenges Western culture’s definition of female sexuality and will have you laughing out loud, shouting “clitoris!” with abandon, and championing sex equality and pleasure for all.

I was delighted to have Sarah Chadwick as my guest on The Merry Menopause Bookclub Podcast.
The Sweetness of Venus is one of the most original books I have read in a long time. In her own words Sarah “Wanted her book to be pleasurable like good sex. For it to be friendly, funny, compassionate, inclusive of men and a bridge between academic research and knowledge. A book that people would pick up and have pleasure reading.” – I think she achieved it all.
Shop Now
Tweet
Share
Share